Joseph Tea’s Report – July 2013
In the last few weeks, Pakistan has been in the news again for violent extremism. What better time for David to make his third trip to encourage the Christian minority there alongside two international friends with a message of hope to this rich nation of poor people.
This fear of missing out will be cured with a revelation of God as a loving Father who looks out for our needs. 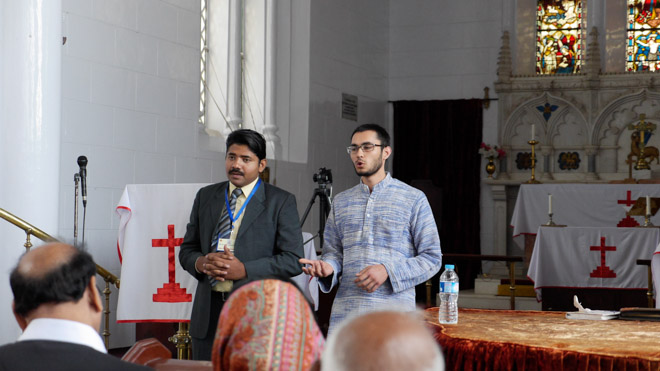 When David asked me to come with him, I recalled tales of run-ins with Intelligence between miraculous healings and deliverances, and immediately agreed. For six months we had been meeting regularly to discuss matters of personal spiritual growth and social transformation, and had begun to minister together in Switzerland. I come from an intellectually strong evangelical background. After questioning the supernatural ways of God, I was desperate to live out this partnership myself. I was not disappointed.

We were joined by Pastor John Shiundu from Kenya, whose experience of persecution, spiritual warfare and breakthrough were an instructional inspiration. Together we taught and preached in homes, seminars and openair gatherings of up to a thousand. We shared joy when God touched and healed people. We prayerfully weathered opposition: protective custody in 50° heat, the police trying to cancel events, and a car crash. Thanks for your prayers and support. We hope the report that follows encourages you.

A cold welcome
From the first day, we are welded together by difficult physical circumstances. In the hill station of Murree, hotels do all their business in only three months of the year, and bursting demand makes them reluctant to invest in hospitality. Our crumby bed sheets are covered with dodgy stains. There is poo in the loo. A Monsoon-like deluge demonstrates a leak in the roof. I briefly panic with the discovery that our ceiling is covered in black mould, the parasite that nearly killed my sister-in-law. Rain becomes hail and we shiver, having packed for the heat. We react with a joyful prayer session, choosing to focus on what God wants to accomplish in the next five days of this camp for church leaders.

Released into Teamwork
It was the first time David was coming with a team, so we were able to demonstrate our main message. If teamwork is like a sport, we encouraged the church to go from playing cricket (few playing, most spectate) to hockey (everyone is involved). We taught on the nature of the game, the rules of the game and our positions on the field. As a ministry team, all three of us had similar peculiar dreams that corresponded to the need we were to address that day. God spoke to us about dealing with fear, resentment and pride. As we taught the Word, many people felt conviction or even a physical sensation and came forward for prayer.

No one turns up to a match carrying luggage: in the same way, all of us need to be freed from past hurts and bondage. Some people fell as the power of God touched them and were released from evil spirits. One young man realised that after deliverance, mobility was restored to his arm, which he had previously been unable to raise beyond a point. Next to seeing individuals released, we emphasised strengthening marriages and families as the foundations of church and society. People were moved to hear the extent of God’s desire for intimacy with us, which aroused a yearning that was rewarded as many people received powerfully from the Lord during a time of Impartation. 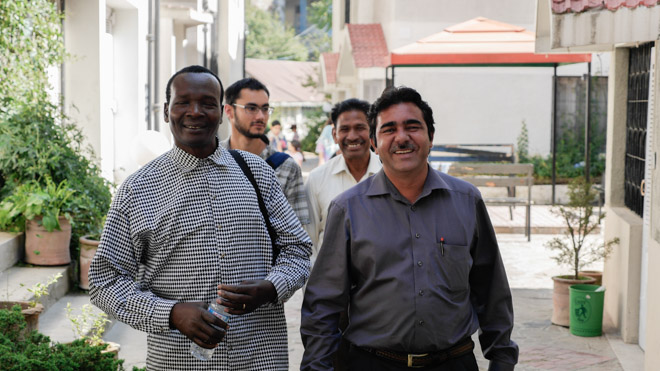 Coming into Identity
Although we are thrilled whenever someone testifies to their healing at a crusade, it was especially fulfilling for us to train local teams to pray for the sick. Twice we taught practical sessions, and in both places many “average” Pakistani Christians experienced for the first time how God used them to heal their neighbour. At the end of the church camp, one lady declared, “Now I am ready to serve the Lord”.
We were encouraged by triumphant stories such as that of worship leader Shaza. Last year, David learned he has such a strong prophetic gift that God gave him the exact address where he could start work. This year, Shaza’s employer pressured him to work Sundays, which he refused on the grounds that he had to lead worship . . . and was fired. A month later, that boss was replaced and his successor brought Shaza back and doubled his salary!

Cornered in the Colony
Back in Lahore, we serve Ghaffar’s church and hold two crusades in the city. Whereas our rural hosts set up in vast fields, the narrow alleys in the “colonies” are so packed we can hardly find the space to walk to the stage, let alone perch the camera. During ministry, hands reach out to pull us towards our next prayer. John preached to a crowd that had seen intense persecution when muslims rioted and burned their christian neighbours’ homes. The police had done nothing but recommend the christians leave as they could not protect them.

In His Power
In another colony, David taught on worshipping in spirit and truth and challenged the audience to be people of integrity. No one responds to the altar call for public repentence, which is not surprising in that culture of shame, but David keeps returning to the issue. In between words of knowledge and miraculous healings, one young lady comes forward and declares, “Everyone lies and steals, but I’ve decided with God’s power and help, from today I will not steal or lie.” David agrees with her and asks for God to fill her and give her His strength to do that. As she is hit by power she shudders so violently David nearly drops the mike and eventually falls. “Why do people fall over?” asks the next man to come onstage. David explains that going from doing things in your own strength to God’s strength is like switching fuel in your engine from CNG to Diesel. It turns out to be prophetic: the man is a poverty-stricken mechanic seeking a job! David has never used this illustration of engines before; it was a sign that God cared about this man’s situation. Caught on Camera
David’s investment in good camera equipment paid off. We could not keep up with covering all the God-stories. Several times, we were filming a ministry session or interview when the person gave an unexpected testimony. “By the way, David, when you prayed for my 12-year-old daughter last year, the tumor she’d had since birth stopped hurting, and two months later it was completely gone!” Next to the one story familiar to David, there was another lady whose baby had been healed of a water-head. Another mother showed us her teenage daughter’s full head of hair, whose scalp had been patchy and scabby until David prayed for her. Documenting these long-term healings was very encouraging because at the crusades we pray for hundreds of people often without immediate visible effects. Though in many cases pain instantly leaves people as we pray, it will take time before a lasting miracle can be claimed. These stories increase our faith that God is healing people whatever we see or feel.

A mullah testifies
Last year in rural Jaranwala, a muslim Member of Parliament publically supported the crusade. This time God brought us another unprecedented : not merely a cleric but the President of a mullahs’ association. He laments, “What a shame the crusade is tonight, which is a muslim festival, because more should have come!” Ghaffar prays for this mullah’s ill mother-in-law over the phone. During the second crusade, the mullah testifies from the stage that her post-operation chances of survival had gone from 5% to over 70%.
With the same team, we reach out to Khurrianwala, a new area that requires even tighter security – a fleet of bikes straddled by two men, a driver and a gunner. Colourful buses bring hundreds of people from the surrounding villages. Since it is our last night, we are permitted to stay and pray for people until everyone has had their turn. 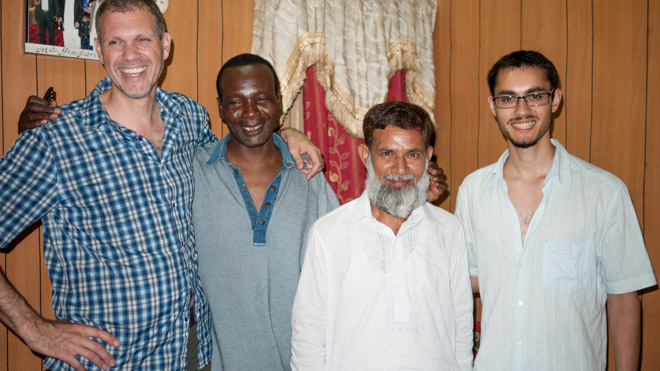 Favourite Quotes:
One lady reported with delight, “During the night I had a visitation from Satan. Earlier, I would have gone to my pastor for prayer. Today I know my authority in Christ and rebuked him myself.”
“We must pray for Intelligence.” One of the five times we had an encounter with one of the agencies.
“Everyone lies and everyone steals. But from today, I have decided to stop doing these things with God’s help.”
…………….

Everyday Corruption and Threats
On the highway to the airport in Lahore, we were congratulating one another on a successful trip when an off-duty Army officer crossed our path from a side street almost killing us all. No one was hurt but he insisted that we were at fault and must pay for the damage to his car. When he saw that we were standing our ground and needed to go he said, “If you don’t pay I will call Narcotics and you won’t be flying anywhere.” David told him straight that he was corrupt and therefore contributing to the poverty of his nation. Ghaffar pointed out that the next thing he might do is accuse us of blasphemy (life sentence) so he settled the matter by paying $60 to the man who caused the accident and massively damaged Ghaffar’s car. (The damage in Swiss terms would be thousands).

The Desire of Nations
“What is the problem of Pakistan?” asks a lawyer sitting next to us on our return flight. Oil, coal and copper, granite and gold … Pakistan has more natural resources than most of Europe. Its water alone could power the entire country with electricity, and yet there is a shortfall of the imported energy with daily power cuts. With 180 million people, the country’s potential is staggering. The national motto is “Faith, Unity, Discipline”. Nevertheless, Pakistan is one of the most corrupt, poorest places on earth. Despite patriotism, it is clear to anyone with eyes to see that the country has an intriguing problem.

Poverty is a mindset, a physical symptom of a spiritual condition. Poor cultures are in the grip of an orphan spirit – an envious, distrustful nature that is bent on illegitimate gain at others’ expense. If everyone were to stop grasping, the standard of life would rise for the entire country because truth and trust are the bedrock of stability and growth. 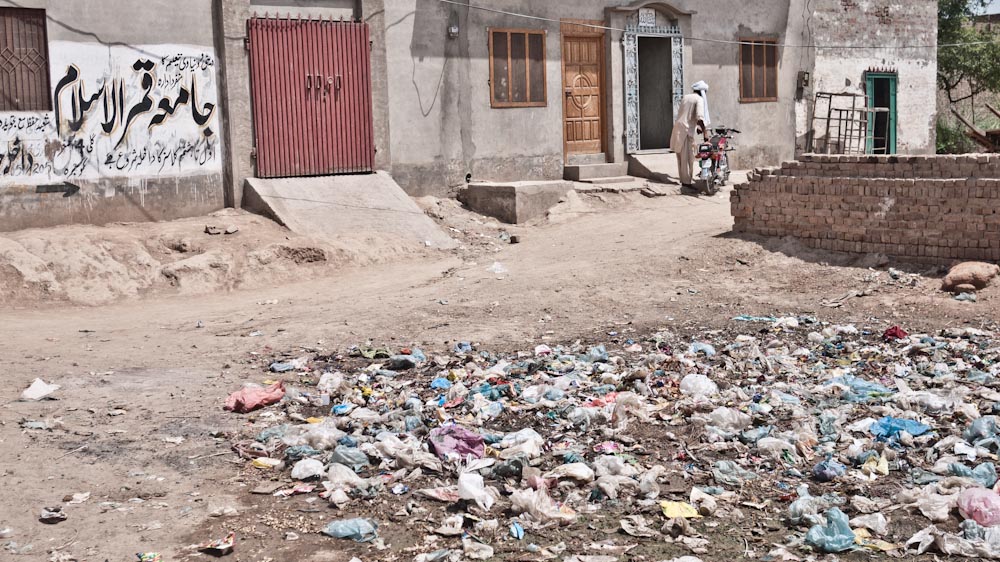