During our preparations, John proposed the plan for the crusades. We would hire some loudspeakers for CHF 10 per day and build a stage for CHF 150 and then do some open air preaching and ministry in time for people to head home before darkness falls. Although our ten-franc-a-day PA system was as expected terribly distorted and the stage looked like a pigpen on stilts, we were excited to take the message out into the community, beside the main road near Pastor Dominic’s house.

The choir began to praise God and curious people began to gather around. Again we came up against the spectator spirit, which Jesus faced in Nazareth when they said in their hearts – let’s see the miracles that you did in Capernaum, here where people know you. I talked about the fact that Kenyans know Jesus – his name is everywhere – but how many are ready to ask him to heal their broken hearts or deliver them? The people were unresponsive. Finally, a few people came forward and asked for prayer, the ice was broken and things began to happen. 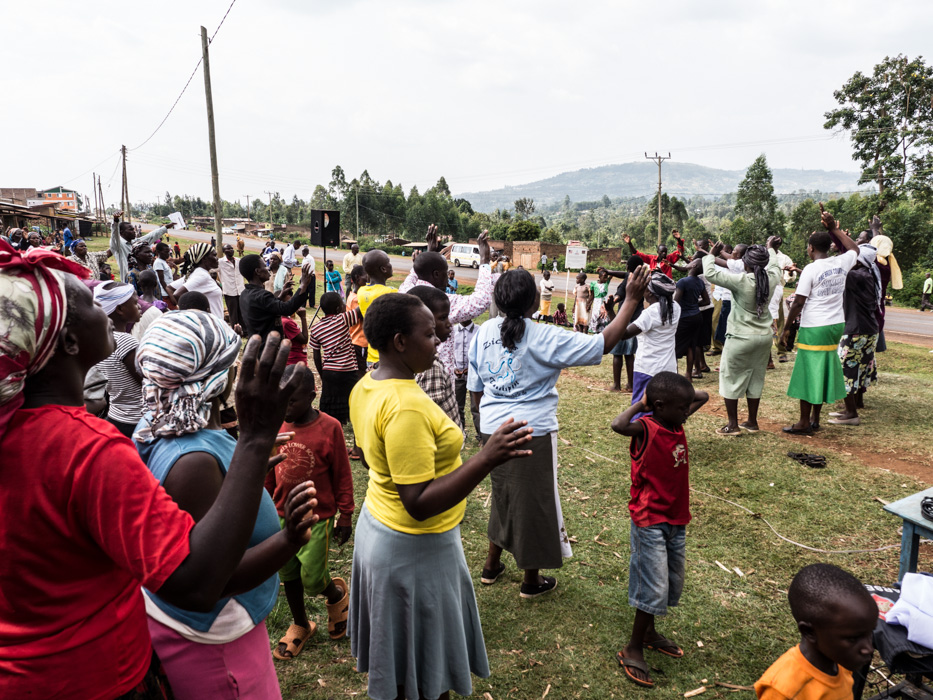 Back in hotel after lunch, dip in the pool. Drying off, the name ‘Jessa*’ came to me and I think, that’s short for Jessica. At the crusade that afternoon, a pastor leads me to his wife, saying she needs prayer but is afraid to come to the front. I consider asking her to come to the front to demonstrate faith and action, but let it go. Her name is Jessica! I guess she has stomach problem – yes, and back. Since 5 years. I ask if anything happened 5 years ago and she said no. Start praying and she’s slain and starts manifesting. Various members of the team minister to her and she is soon sitting on a log apparently okay again. David goes over towards her and she moves to run away. Justa catches her and she starts to manifest again. We take her away from the meeting and counsel her with John. By the time we are done, she has confessed adultery and witchcraft and gets a further and deeper deliverance.

She turns out to be the wife of Ronald* who got delivered from the religious spirit and is now on fire for God. After deliverance she gives her life to the Lord. The next day she gives her testimony in the crusade and in the conference. Ronald tells his side of the story too. For years she has provoked as best she can and mocked his interest in church. They were in the Seventh Day Adventist church but now they have a lively new Spiritual Home, Christ Transformation Centre. From here everything just accelerated. The power of God was falling on many and healing and deliverance testimonies began to abound. 3 years of chest pain, 5 years of knee problems. Allergies were healed. A diabetes patient experienced a massive stabilisation of his blood levels.